With NON STOP Evolution, history enters a new round – nature and humans finally reach harmonious co-existence. On July 1, the innovative, all-natural energy drink launched an advertising campaign featured on the country’s leading television channels, the Internet and OOH in Ukraine’s largest cities, urging consumers to discover a truly healthy energy source, life-affirming beauty and the power of nature itself. 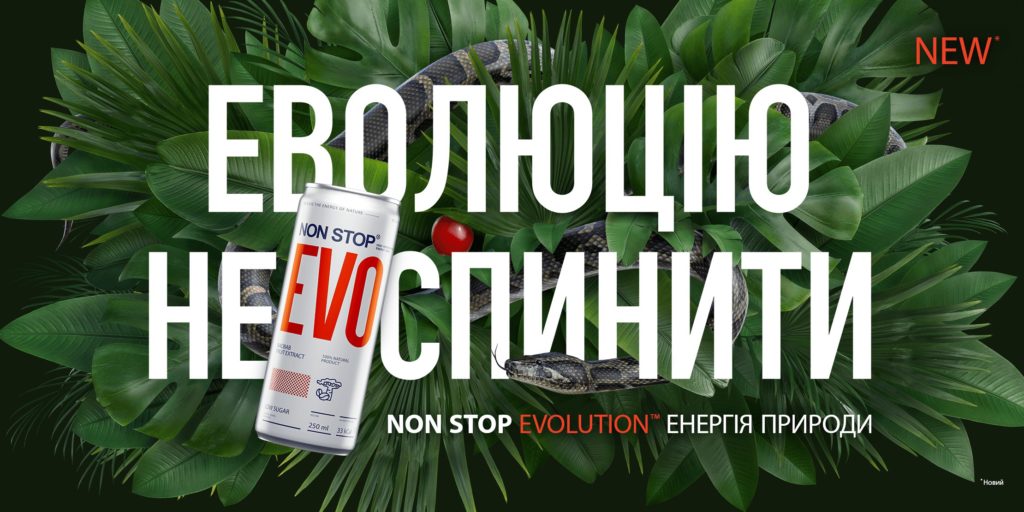 “NON STOP Evo is a completely new product for the Ukrainian market, where the concept of natural purity encourages reflection about a new, faster way to achieve harmony. To avoid a long “trial and error” phase, the key element is missing – the pure energy of NON STOP Evo. Therefore, with our first advertising campaign we want to emphasize that returning to nature, with the latest scientific knowledge about it and respect for its universal laws – this is the highest step of evolution”, – said Boris Tkachev, Director of Strategy and Research of New Products Group.

As part of the “Non Stop Evolution” advertising campaign, a brand video was created for the new drink, showcasing the biblical version of human development through the prism of modern industrial aesthetics. In the attention-grabbing video, in which the viewer follows the passion of a couple in love, the plot imperceptibly raises many questions. What if Eden is not paradise? What if love is not a sin? And what if there is something more desirable than the forbidden fruit? NON STOP Evo offers an alternative history, where the bite of temptation is healing, and the serpent of hell is defeated once and for all by the energy of human feelings, blessed by nature itself…

This is the interpretation of the NON STOP Evo concept from the authors of the scenario – the creative agency Tabasco. The creator behind the commercial is Leonid Kolosovsky, a well-known Ukrainian producer and clipmaker; the production studio Rocket Juice Film was involved in making the video. The new video will be broadcast until the end of the summer on several national TV channels, such as Novyi Kanal, ICTV, M1, M2, K1, Zoom, Mega, UFO-TV, and Channel 24.

“We had a difficult task – to make our own version of the story of Adam and Eve inspired by the works of David Lachapelle. We are glad that such a talented director as Lenya Kolosovsky was with us, because he always has a lot of ideas and an unquenchable passion for the creative process. We also quickly got along with the creative director of New Products Group Sasha Stryzhelchyk, who not only brought his extraordinary vision to the project, but also found a very textured and charismatic main character, our Eve”, – commented Alexander Smirnov, Creative Director, Partner at Tabasco.

Simultaneously with TV and Internet ads, NON STOP™ launches outdoor advertising. Until August 31, the “Non Stop Evolution” ad will be posted on billboards, light boxes, scrolls and other OOH formats on the streets of Kyiv, Lviv, Dnipro, Odesa and Kharkiv.

NON STOP Evolution is the first 100% natural energy drink in Ukraine, which appeared on the shelves of Ukrainian stores in May 2020. The drink contains baobab extract, ginkgo biloba, natural caffeine and guarana. The idea of ​​primary purity and completely natural origin is successfully emphasized by the modern minimalist design of the can by TS/D Agency. Dmytro Tsapko, the agency’s Founder & Art Director, comments on the concept: “NON STOP brand has been on the market for over 15 years, and does not stand still – it’s undergoing changes, picking up fresh trends and implementing them according to the tastes and expectations of the target audience. Eco-conscious trends, conciseness, passion for innovative technologies – all this formed the basis of the new drink both in terms of form and in terms of content”.