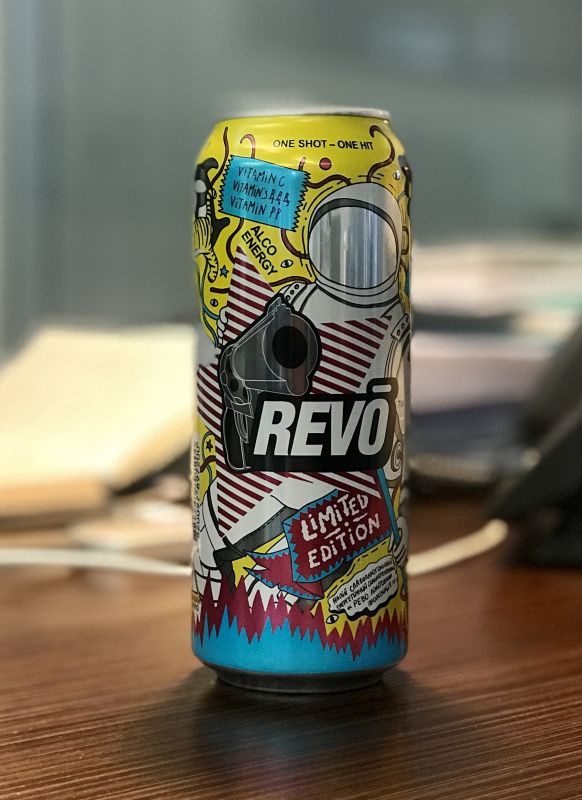 New Products Group is preparing to launch a limited version of the drink REVO™. An absolutely new explosive flavour of the low-alcohol energy drink is orange and strawberry with the addition of one special ingredient – black pepper. The citrus drink with a hint of bitterness also contains the traditional for the entire REVO™ line extracts of guarana and damiana, caffeine, natural juices and a vitamin complex.

We just started pouring the new product into cans, the design of which is a real pop-art masterpiece. The talented Ukrainian artist, illustrator and calligraphist Evelina Yatselenko was involved in creating the design. The comic-book can with an aluminium helmet calls back to the legendary REVO commercial, whose main character is a Cosmonaut.

In support of the new product, a unique cross-media online project was launched – a series of short videos. For a few months about once in two weeks there will be new episodes on the Youtube channel, and the first episode is already available!

The idea behind the series is that there are no desperate situations. Any obstacles can be overcome if you look at the situation from a new angle, and approach it with creativity, courage and humor.

The main characters of the series are an explosive pair: a modest and shy Cosmonaut (he hides himself online, like in his spacesuit) and his bold, completely “bonkers” buddy REVO Can. By the way, REVO is voiced by the charismatic rapper Mytee Dee – beatmaker, battle-MC, master of witty comedy. “Yo bro, it’s like you’re on the moon!”, REVO says to his shy friend in a spacesuit. REVO is a daring character, ready to argue with anyone, and knock them out with a single sentence. “One shot – one hit” is his motto and slogan. REVO Can is the one who gives the Cosmonaut his courage, helps him find a way out of and benefit from any situation. The intoxicating energy of going wild, challenging your routine, having maximum drive and fun – this is what REVO™ embodies. In each episode the viewer will get to sympathize with those two very different characters who are explosive together, enjoy their comedy and the unusual approach to ordinary events.

“The new REVO™ is really something explosive, and the can in the style of pop art is perfectly in line with its extraordinary taste. We deliberately created it as an art object and we guarantee that REVO™ limited edition will give everyone not only courage, but also style. The characters of our story will come to life in the episodes, because storytelling is one of those things that is very valued nowadays. If you want to evoke feelings of emotional investment in someone or something – tell a story. We are confident that the amusing and touching adventures of the Cosmonaut and the REVO Can will be of interest to our target audience, and we have other interesting ideas for the future”, – notes Elena Selutina, PR Director of New Products Group.

The limited version of REVO™ will become available at the Ukrainian retail chains in mid-June 2018.